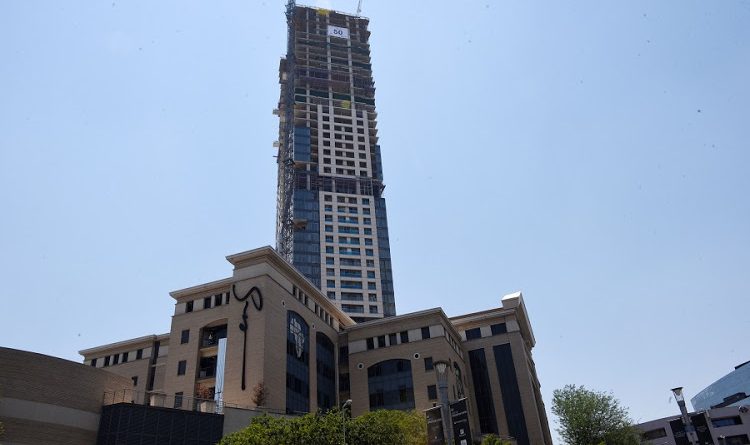 The Carlton Centre looks set to lose its crown as the tallest building in Africa when the 55-floor glass-and-concrete Leonardo development is completed later this year. It will stand at a height of 234m — 11m taller than the Carlton. But while the sheer scale of the development has been widely lauded, its aspirations to aesthetic grandeur have drawn mixed reviews.

There’s no doubt The Leonardo is an ambitious commercial development. The building, which will be valued at about R3bn, occupies prime real estate on Maude Street, a stone’s throw from the JSE. It is set to offer a mix of residential and commercial space: 200 apartments, 15,000m² of office space, a hotel and a small retail section. If the penthouse occupying floors 53-55 is sold at its R250m asking price, it will go down as the most expensive sectional title property ever sold in SA.

Henning Rasmuss, a founder and director at Paragon Architects, says it’s “amazing” that a mixed-use development of this size is being assembled in SA. “Property financiers in SA tend to be super-specialist and finance only single-use buildings with a single predictable income model,” he says. “The Leonardo breaks that mould.”

Paragon has designed numerous buildings in Sandton. Legacy has partnered with Co-Arc International as the architect for The Leonardo.

The Leonardo is a tall tourist that is not prepared to speak the same language as its peers
Robert Rich
It’s also a necessary addition to Sandton, says Keillen Ndlovu, head of listed property funds at Stanlib, given increased densification in the commercial centre. Sandton City is fully let, and there’s increased demand for housing stock in Africa’s most highly valued hub. While other developments are on the cards — Abland, for example, is building Sandton Gate on the edge of the suburb — Ndlovu says more people want to live on streets like Maude, given the proximity to their places of work.

With The Leonardo, the Legacy Group has “changed Sandton’s skyline and created something that is a new symbol for SA”, says Gijs Foden, sales director for the group, which is also responsible for Sandton’s Michelangelo Towers and Raphael Penthouse Suites. “It is an iconic addition to Sandton. When you look out of the window you see The Leonardo. You can’t miss it.”

But not everyone is convinced by the building’s architectural merits, given the lack of a local motif in its sleek, postmodern design. It speaks to an ongoing debate about what constitutes “African architecture”.

What makes a building “South African”, says Richlabs Architecture founder Robert Rich, is its context as well as the “climate, social and cultural needs of a diverse nation”. He believes The Leonardo “has no iconography that defines it as specifically African or South African”.

“It does not respond ecologically to Johannesburg’s temperate climate, it takes no lessons from the immediate context, other than that it shares a skyline with an existing Italian called The Michelangelo. It is a building that could be placed anywhere in the world.”

The problem, says Peter Rich, a former professor of architecture at Wits University, is that too many architects in Africa simply replicate designs from the West, “creating lazy glasshouses”.

The result, in Sandton, is a glut of “boring” buildings that offer no public space around them — and The Leonardo is little different.

The best buildings, in his opinion, are those that “integrate aspects that are part of the African continent into their work”.

But while Rasmuss believes The Leonardo deserves to be lauded for the sheer scale of the development, Robert Rich is more dismissive. “Leonardo da Vinci was a man of innovation and discovery. I just do not see the connection between the building and this great man’s ethos,” he says. “It is a tall tourist that is not prepared to speak the same language as its peers.”