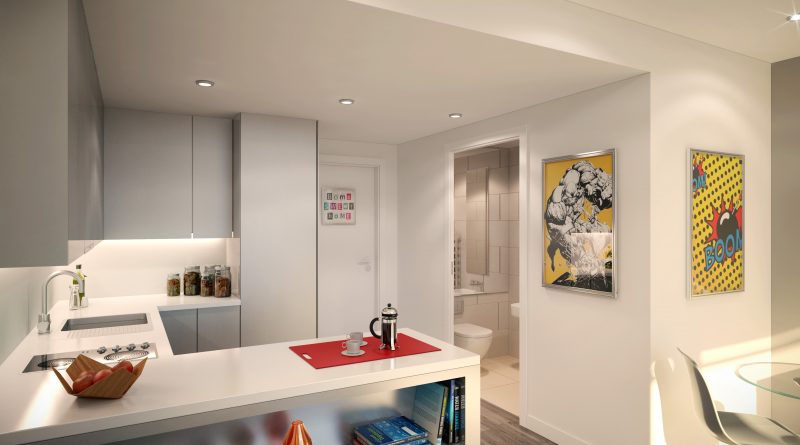 According to Knight Frank*, there is an overwhelming demand for purpose build student accommodation (PBSA), despite more than 11 000 beds expected to be completed by the start of the 2019/2020 academic year. Across the more than 60 university towns and cities in the UK, full-time student numbers outweigh current PBSA bed spaces by 3 to 1.

Bathurst says that many South Africans assume it is too expensive to invest in property in the UK but for as little as R1.2m, you can own a full title offshore PBSA property. The best performing property asset class in the UK and the only property class to perform during the recession.

Although buying student accommodation that your own children could use when they study sounds like a nice idea, with so many universities abroad it is tricky to plan very far in advance. Bathurst says, “Many of our clients try to make decisions that may not be implemented for three or four years. This creates a lot of pressure. Waiting also limits their investment potential. My advice is to take advantage of this opportunity and invest in a student flats in a university location that offers the best investment and yield, even if your children won’t end up studying there,” she says.

“As with all good investments, make a smart decision rather than an emotional one. The yield from a carefully chosen investment property will provide a monthly income in a stable currency directly into a bank account where the property is. Your child could use those funds to pay their rent at their chosen studying location.

“PBSA is thriving in the UK, it is the UK’s highest yielding property asset with the total investment in the sector increasing consistently over the past few years. In 2015 this sector overtook the US as the largest student property market,” says Bathurst. “More than 70% of people investing in this sector are international investors.”

According to Knight Frank, most student beds – 69% – are owned and operated by universities but as the demand from international students increases, universities rely more and more on the private sector to fill the accommodation shortfall.

The UK is also the second most popular location for overseas students, with record student intake numbers for the last four years. “This growth shows no signs of slowing down with the weakened sterling making it more alluring for international students and their parents,” says Bathurst. “For the fifth consecutive year, a record number of non-EU students have applied to study in the UK. The British Council predicts that the pool of global ‘travelling students’ will double to eight million by 2025, with Britain set to attract more than the US.

The two main types of student accommodation are cluster flats, which are less expensive units with shared kitchen and lounge spaces, and the more luxurious option of studio flats, which command higher rents. Especially in the emerging university towns, cluster accommodation is booming. 62% of units under construction are cluster apartments, with the remaining 38% being studio apartments. However, in established university cities, like Newcastle, Liverpool and Leeds, where there are a number of institutions, there is a demand for more luxurious studio apartments.

Bathurst highlighted a project Hurst & Wills are launching soon, situated in the university town of Newcastle-under-Lyme, close to Keele University, Staffordshire University, and Royal Stoke University Hospital (part of Kelle Medical School) With three universities and large number of students, Newcastle is a vast market, ripe for top-end studio units. “There is such an undersupply of student housing in Newcastle,” says Bathurst. “The demand from those three universities is 25 000 strong, and there are currently only 500 studio apartments.”

“We are very excited about this new development,” she says. “These are luxury studio student accommodation units, available from £74 600 (about R1,3 million). There is a 7.5% NET yield guaranteed for five years and it is full managed and completely hands-off,” says Bathurst. “They are fully furnished, including a TV, and built by reputable, leading developers with 30 years of experience.”

PBSA is also popular elsewhere in Europe, such as Lisbon and Porto in Portugal. Bathurst says, “In Porto it’s still possible to buy plots or buildings to develop or refurbish in the centre of Porto or close to universities for affordable prices. However, we expect this window of opportunity to close soon, as real estate demands are increasing rapidly.”

McKinsey & Company have estimated that international income of Higher Education in Portugal could reach €1.4bn by 2020. The high demand from international students wanting to study (and live) in Lisbon has led to many universities investing in new campuses and student housing complexes.

According to Bathurst, there are currently 56 000 out-of-town students living in Lisbon, 16 000 of which are international. With only eight private PBSA developments available, limited to 450 students. Porto is experiencing the same market momentum, but at a smaller scale. “The existing supply of private PBSA, which was developed and is operated by national players, is fairly recent and shows occupancy rates of around 100%,” says Bathurst. **JLL estimates a shortage of 13,000 to 18,000 beds in Lisbon, Porto and Coimbra.

“It is important to work through an independent property specialist, especially in this booming market,” says Bathurst. “Developers could mislead clients as they are under pressure to sell their own stock, while independent specialists are unbiased and work for the client.”