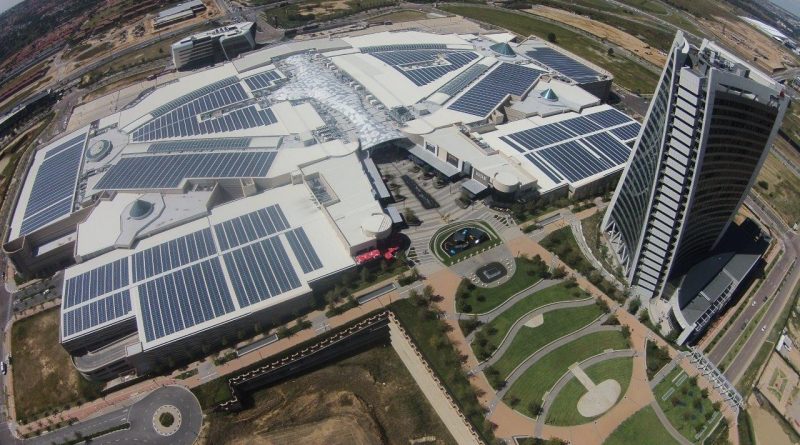 The annual awards, which took place on 18 October 2018, seek to recognise exceptional shopping centre marketing, innovation and creative achievements, together with economic success, within the South African property industry. The Mall’s attraction of international brands such as Michael Kors, Emporio Armani and niche stores only found at Mall of Africa such as Zara Home, H&M Home, Maxhosa and Kream- a destination restaurant, which have all accounted for the Mall’s impressive reputation.

Key to Mall of Africa’s success has been its central location in the heart of Waterfall City. With its combination of visibility and accessibility, the Mall has become a centrepiece for the surrounding area. Its growing footprint can be attributed to the diverse developments and activities occurring around the Mall and the Waterfall node.

‘’It is a great honour to receive this recognition from the SACSC as it speaks to all our hard work and dedication in making the Mall of Africa a truly innovative space that pushes the boundaries of traditional retail centres – We are very grateful for the Awards,” said Michael Clampett, Head of Retail and Asset Management at Attacq.

The Mall walked away with a gold award in the Community Relations category for its successful Africa Art Collective Event, which created a professionally run, broad- based platform for artists to showcase their work, while enabling the gallery at the Mall to report a 20% increase in turnover and enabling the visual art community to generate income by making use of the seasonal collectives.

The third award was a silver award for the Integration category for hosting the National Antique and Decorative Arts Faire, which increased foot traffic for the duration of the faire, this was also supported by a high return on investment and publicity generation. The Mall developed an integrated advertising campaign which reached a wider audience, penetrating secondary and tertiary markets.

What sets Mall of Africa apart is their commitment to pushing the boundaries of innovation, through embracing technological advancements within the retail space, combining both digital and physical channels into one branded, value-added shopping journey.

The Mall’s latest innovation is the world’s largest integrated rooftop PV/Diesel hybrid solution. The 4755kWp installation covers most of the available Mall roof space, an area of approximately 45000m²/4.5ha with the energy generated to be used to power the Mall’s daily operations.

In the past year, Mall of Africa has become a home for a range of lifestyle and leisure events, which include the Prestigious National Antique and Decorative Arts Faire, AFI Fashion Week in Johannesburg and the three editions of the Africa Art Seasons Collection in partnership with the Julie Miller Investment Art Institute.

About Mall of Africa

Located in the heart of Waterfall City, Mall of Africa, which received the 2018 Sunday Times Generation Next Award for the ‘Coolest Mall’, delivers a compelling life-style experience in a Mall that reflects, architecturally, the iconic landscapes and geological phenomena of Africa.

This ultra-premium retail showcase was opened on 28 April 2016 and offers access to over three hundred retailers, many of which are flagship stores. Mall of Africa constantly strives to push the boundaries of innovation, technology and originality in order to create a unique shopping experience for visitors. It has fast become one of the top go-to locations for a full shopping and lifestyle experience and stores in the Mall range from well-known local names such as Woolworths, Browns the Diamond Store, Mr Price and Cape Union Mart to international luxury brands including Emporio Armani, Superdry, Hugo Boss, Michael Kors, Paul Smith, Versace and more.

Increasingly the Mall of Africa has become the preferred host for a range of lifestyle and leisure events, including being the official host of the Mercedes Benz Fashion Week in Johannesburg, the National Antiques & Decorative Arts Faire and the third edition of the Africa Art Collective. At Mall of Africa, shoppers can also look forward to a number of fabulous new stores – often the first landing of global brands on South African soil – and enjoy incredible restaurants and numerous events throughout the year.

Owned in a joint venture by Attacq (80%) and Atterbury (20%), Mall of Africa is South Africa’s largest shopping Mall ever built in one phase, offering over 130 000m2 of retail space organised into uniquely identified court areas made for easy shopping navigation, as well as exceptional access, location and visibility. Perfectly situated between Johannesburg and Pretoria, Mall of Africa is a visual, social and economic anchor within Waterfall and is becoming a dominant super-regional Mall, located off Allandale in Waterfall City.