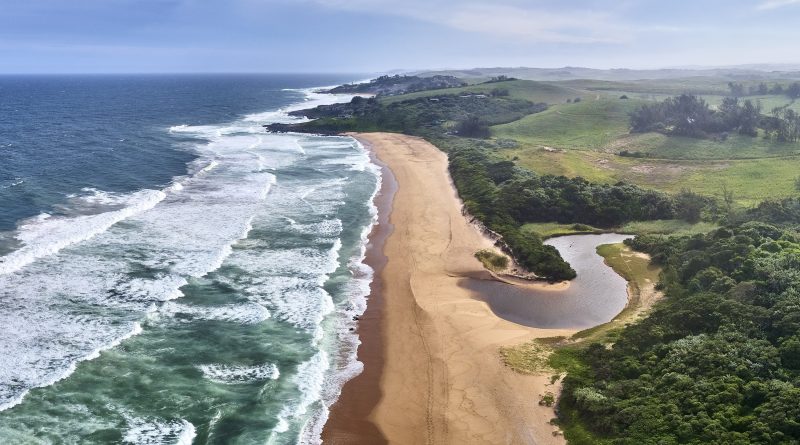 Tinley – a secluded coastal town on KwaZulu-Natal’s North Coast about ten kilometres north of boomtown Ballito – is poised to take on the mantle as the province’s next tourism and property hotspot.

That’s the word from JSE-listed sugar agro-processing and property group – Tongaat Hulett – which is finalising plans around its new mixed-used Tinley Town development on a tract of land it owns straddling the Umhlahli River, near Tinley Manor. A major internationally branded beach resort is planned for the new node as an anchor or catalytic project at Tinley, which boasts kilometres of pristine coastline, lagoons, indigenous coastal forest and a key location on KwaZulu-Natal’s primary growth corridor between the ports of Durban and Richards Bay.

It said the resort would be the first of its kind in Southern Africa and that Tinley is one of its northern development initiatives that held significant tourism potential. Together with the proposed new coastal resort, it said the new Tinley development node would cater to the international and domestic tourism markets, and also had the capacity for mixed-use development. Tongaat Hulett added that the EIA process for the resort opportunity was currently underway, with the identification of the international hotel operator soon to be announced.

Michael Deighton, Managing Director of Tongaat Hulett Developments, commented: “While the Durban and uMhlanga areas cater very well to the business and leisure tourism markets, there is still a gap to be filled by a large scale international resort operator… With essential infrastructure already in place and the potential to improve this concurrently with growth and demand, the region has proved itself as a desired destination and Tinley, a picturesque coastal town ten kilometres north of Ballito, is poised to take on the mantle as the province’s next tourism hotspot.”

He said: “Tourism has been identified as both a national and provincial priority and together with the associated ancillary economic activities will have a significant impact on socio-economic growth and development in the region. To this end we have been working closely with the local and provincial government to present the opportunity to solicit national and international brands looking at opportunities to establish themselves in KwaZulu-Natal.”

Tongaat Hulett’s statement added: “Given its sublime warm climate, beautiful beaches, proximity to the Drakensberg and the bush and a myriad of natural assets, it’s no wonder KwaZulu-Natal is the market leader for domestic tourism in South Africa and ranks second in terms of international (leisure) tourism.”

The group said that with the advent of Zimbali Coastal Resort in the late 90s, areas north of Durban including uMhlanga, Ballito and Salt Rock have experienced unprecedented growth in the last three decades with significant return on investment. “With the residential and tourist boom and the commissioning of the King Shaka International Airport and Dube TradePort, other sectors are now also thriving. Schools are mushrooming in the region to support the influx of people and the commercial aspects continue a strong upward trajectory especially with the emergence of the nearby Durban Aerotropolis,” it added.

Under the guidance of the “Durban Aerotropolis Master Plan” (draft January 2018), Tongaat Hulett said a development framework was being implemented to create a purpose-built city that will enhance urban and national competitiveness through improved multi-modal transport access and planned, coordinated aviation-linked commercial development. This would make the airport, surrounding areas and the entire province more economically efficient, attractive to investors and sustainable.

Deighton said: “We’re already moving in leaps and bounds with the proposed GO!Durban Integrated Rapid Transport System being implemented later this year, the further entrenchment of King Shaka International Airport and Dube TradePort and the area as a fulcrum between the busy ports of Durban and Richards Bay.”

Making the North Coast more accessible, King Shaka International Airport currently can accommodate 7,5 million passengers annually with this figure expected to climb to 45 million passengers per annum by 2066. “The introduction of the new direct British Airways route between Durban and Heathrow London has opened the area up to even more international tourist traffic and cemented the province as a world-class destination,” Tongaat Hulett said.

“Given its connectivity and natural assets, the region is increasingly being identified by global resort and tour operators as South Africa’s foremost opportunity to compete with other global beach resort destinations, provided critical mass can be achieved. Furthermore, varied business interests and top-quality facilities also contribute to KwaZulu-Natal’s tourism offering,” it added.

“We just need to look at the numbers to understand how well KwaZulu-Natal is doing. Hotel occupancies have remained above 70 percent with the Average Daily Rate (ADR) growing by eight percent per annum since 2010,” said Deighton. According to Tongaat Hulett, Revenue Per Available Room (REVPAR) in the greater uMhlanga area is R1 274 with the hotel sector forecast to grow by three percent. The uMhlanga market is predicted to absorb an increase in hotel inventory over the next five years.

“Tongaat Hulett believe in shared value creation through responsible and meaningful land conversion activities. Developments such as Zimbali Coastal Resort, the uMhlanga Ridge Town Centre, Cornubia and Sibaya Coastal Precinct have catapulted the area’s desirability as a world-class place to live and work. Together with the KZN Department of Economic Development, Tourism and Environmental Affairs (EDTEA), and local municipalities, it continues to keep an eye on key demand-drivers and using their experience to implement best practice, sustainable urban planning and design principles that can best respond to South African society’s changing needs.”

Identified as one of KwaZulu-Natal’s catalytic beach resort developments, Tinley Town will be unlocked in collaboration with all stakeholders. The strategic objective is to create enhanced value in the surrounding assets, which will benefit from proximity to and association with the resort and higher pricing premiums as destination value takes hold in the area.

As with all Tongaat Hulett’s development initiatives, wellbeing for the surrounding communities will lie at the heart of this key iconic project. Said Deighton: “Just like Sibaya Coastal Precinct and other projects before that, through Tinley we will ensure there is purposeful shared value creation for all our stakeholders and this will include the nearby rural communities which will also benefit socially and economically from this development.”