A few kilometres down the road, on the eastern fringes of the City Bowl in Woodstock, graphic designers John and Lesley Whitmore last year bought a renovated semi for R2.775m. That is 85% more than the R1.5m the previous owner paid in 2013.

Equally steep price growth has been recorded in swanky upper-end areas, where the well-heeled would typically fork out R10m-plus for a trophy home. 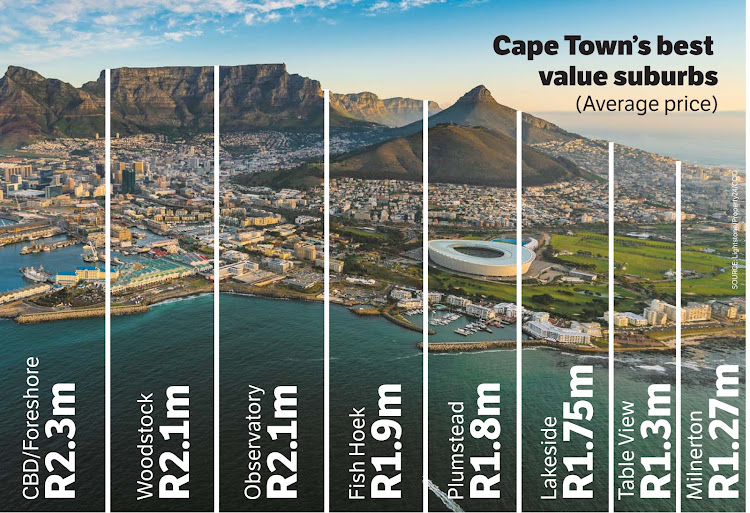 Official data from the banks and the deeds office paint a similar picture of surging house prices in Cape Town amid muted growth in other major cities.

According to property company Lightstone, Cape Town house prices were still rising at an average 13% in the fourth quarter last year, versus less than 4% in Johannesburg, Pretoria and Durban.

The price divergence is even more significant over the longer term. FNB data show that Cape Town house prices are up 78.5% on average since 2010, the start of the post-2008/2009 recession recovery. Johannesburg, Pretoria and Durban lag way behind, with cumulative growth of 36%, 42% and 30% respectively over the same period.

Cape Town’s outperformance has been driven by a number of factors: the continued “semigration” trend of up-country buyers flocking to the Cape in search of a more relaxed, outdoor lifestyle and better work/play balance; seemingly better governance; prospects for superior capital growth on bricks-and-mortar investments; growth in the tech, advertising, design and other creative industries; and growing international tourism acclaim.

Existing homeowners have, of course, benefited greatly from Cape Town’s rapid rise in house prices. But it also means new home buyers are increasingly being priced out of the market.

Industry veteran Lew Geffen, chairman of Lew Geffen Sotheby’s International Realty, says logic dictates that the flow of “semigrants” to the Cape will continue only if upcountry buyers have the financial means to uproot and move.

“If the national economy is weakening and house prices elsewhere in the country come under further pressure, relocating to Cape Town at current prices will simply become unaffordable,” he says.

Geffen warns that the Cape housing market will slow down if sellers don’t become more realistic in their asking prices. “Cape Town sellers have become immensely greedy over the past few years, but they’re not thinking ahead.”

FNB property strategist John Loos agrees that the premium at which Cape Town’s housing market is trading compared with other metros is starting to pose affordability challenges, especially for first-time buyers.

He says people who buy their first homes are not as strong financially as repeat home buyers, who have had time to build up equity in previous properties and may be able to fork out more to replace their Johannesburg or Pretoria homes with a Cape Town one.

Already only 8% of all housing transactions that were concluded in Cape Town in the six months to the end of March were believed to have gone to first-time buyers, according to FNB. In contrast, Johannesburg and Pretoria’s first-time buyer estimates are far higher, at 27% and 21%.

This is not surprising, though, given the ever-widening price gap between Cape Town and other cities. For instance, the average house in Cape Town now costs R1.4m, which is 40% more than Johannesburg’s R1m (FNB figures). At the higher and upper end, priced at R2.5m plus, the cost gap is believed to be higher.

Estate agents across the board rate the city centre, which has a footprint of about 2km², as well as nearby Woodstock and Observatory as Cape Town’s best investment destinations in the sub-R3m bracket.

Geffen says the CBD has shown a huge increase in demand for apartments over the past three years, both to buy and to rent.

The trend has been driven by increased traffic congestion on Cape Town’s major arterials and freeways, prompting residents who work in the CBD to move closer to the inner city.

CBD apartments are typically priced between R1m and R3m, with the highest price paid to date being R10.7m for a 421m² penthouse in the Mutual Heights building in Darling Street. The CBD’s growing popularity as a place to live has been supported by the fact that it is fast becoming a vibrant, 24/7 mixed-use node.

According to the recently published State of Cape Town Central City Report 2016, the CBD was only truly discovered as a live/work/play destination in 2014 by pioneers looking for an urban lifestyle. Demand for apartment living has since increased markedly, which has resulted in a residential and commercial development boom of unprecedented scale.

Figures provided by the Cape Town Central City Improvement District point to a hefty R12bn worth of property developments recently completed, currently under construction, planned or proposed for the CBD.

Just how popular inner-city living has become is clearly underscored by the fact that 228 apartments changed hands in Cape Town’s CBD last year, up from 163 in 2013. The average sales price of apartments rose simultaneously from R1.42m to R2.33m — an increase of nearly 64% within three years. That places the average selling price for the CBD at R33,921/m².

Rental demand in the CBD has shown an equally strong uptick over the past three years. According to the report, average rentals for two-bedroom apartments in the CBD were up about 11% in 2016 to R22,290/month.

Latest Payprop figures show that Gauteng landlords currently have to be satisfied with rental yields of no more than 6%-8%.

Seeff Properties chairman Samuel Seeff says prices have virtually doubled in Woodstock and neighbouring Observatory over the past five years.

However, buyers can still find good value in both these up-and-coming areas, with semi-detached houses or townhouses in both suburbs averaging just over R2m. These areas boast a creative, cosmopolitan community and offer easy access to the city centre and the University of Cape Town.

Seeff believes new developments in Woodstock, such as the recently launched mixed-use development The Iron Works, offer excellent buy-to-let opportunities. Apartments in this complex sold out in record time for R1.3m (including VAT) and upwards.

Buyers looking for traditional standalone homes in a suburban environment should consider Fish Hoek in the False Bay area, Lakeside and Plumstead in the southern suburbs, as well as Milnerton and Table Bay on the Western Seaboard.

Plumstead, one of the oldest suburbs in the southern suburbs, offers gabled Cape Dutch family homes on stands of typically 500m² for about the R2.5m mark.

In Table View on the Western Seaboard, an entry-level property sells for about R1.5m, while two- and three-bedroom apartments are available for R700,000.

Day says in nearby Milnerton, three- to five-bedroom homes are priced at less than R3m. The area has new road, school, commercial and retail infrastructure and is also on the MyCiti bus route, offering an easy 10km commute to the CBD. Blouberg beach is a mere five minutes’ drive away.

He says Lakeside is one of the few areas in the southern suburbs that isn’t yet overpriced. “Homes in Lakeside are generally older and well built, so many buy here with the intention to renovate. The area is safe, close to all amenities and offers easy access to major transport routes.”

Goslett says Somerset West is becoming an increasingly popular alternative for buyers who work in the CBD but can’t afford to live in the expensive southern suburbs. The area offers excellent schools and proximity to Stellenbosch University, and a relaxed, country lifestyle.

Entry prices are still below R3m, with plenty of newly developed townhouse and cluster complexes to choose from.

However, Goslett warns that the window of opportunity to buy in Somerset West at a discount to more centrally located Cape Town suburbs is closing quickly.

What it means: The city still offers some pockets of relative value