Accelerate Property Fund is banking on the relaunch of the Fourways Mall in 2018 to boost confidence in the company and its shares.

Accelerate, which wants to dominate the Fourways node, has redeveloped the mall — set to open in the last quarter — into Africa’s largest shopping centre.

“Fourways Mall is expected to be approximately 200,000m² of gross lettable area upon completion and the positive impact of this super-regional centre on the Fourways node and the fund cannot be overstated.

Accelerate’s return was a negative 19.01% in 2017. Sentiment in the company was dulled by general negativity around the prospects of developers in SA. 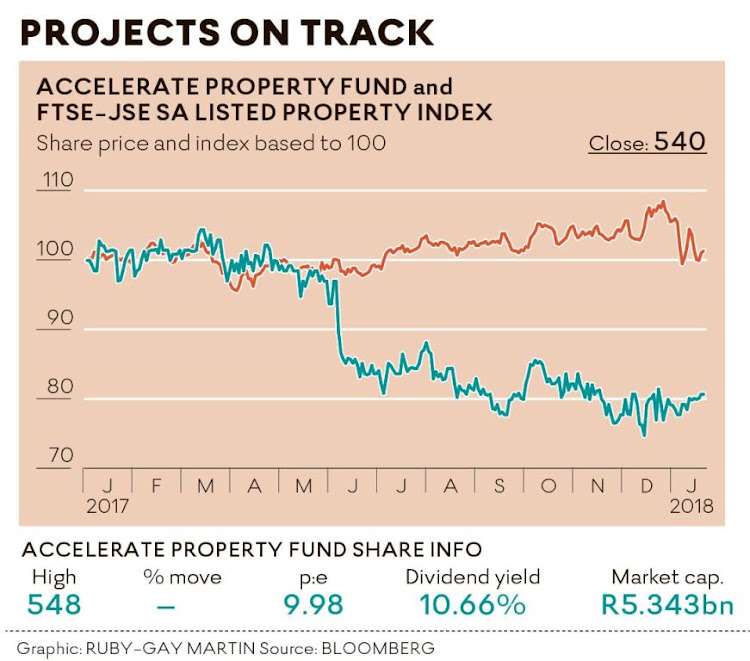 This was while the sector’s average return for 2017 was 16.18%, said Garreth Elston of Golden Section Capital.

But the group, which listed at the end of 2013, has been rolling out an ambitious plan to turn Fourways Mall into an attractive super-regional centre.

A 2017 research report compiled by Dirk Prinsloo of Urban Studies showed that between Sandton City, Mall of Africa and Fourways Mall, Fourways had the most growth potential.

“The Fourways node will be the most dominant retail market in SA. The super-regional status of Fourways Mall will act as a catalyst for additional urban growth. The growth of the node is underpinned by the infrastructure development linked to road access and public transport,” he said.

Accelerate is also banking on family entertainment being a drawing card for malls, as has been the case in western Europe over the past few years.

Accelerate will launch the first KidZania children’s store in SA. KidZania is a Mexican chain of indoor entertainment that comprises mini cities built inside malls.

The Fourways KidZania will be 8,000m² in size and will anchor the family entertainment offering within the mall.

Evan Robins of Old Mutual Investment Group said Accelerate had taken a long time to develop the mall and that various competing centres and redevelopments had also came on line during that period.

“The Fourways node is dense and is getting more dense, so there is scope for expanded retail in the area,” he said.

“The broader catchment overlaps with existing centres in the area like Mall of Africa, so there will be stiff competition,” Robins said.

Any positive effect on earnings from Fourways Mall will only be seen in 2019.

The group has forecast flat dividend growth for its 2018 financial year as it digests the mall’s development costs.

Accelerate’s market capitalisation has more than doubled from about R2bn at listing to R5.3bn now.