Fund managers have quashed suggestions that the Resilient group of companies owns or has exposure to overrated assets in SA and eastern Europe, saying that its peers have actually tried and failed to acquire a number of these assets.

“We have visited most of the assets and we like their dominance, quality, age and diverse tenant profile with most of the major European brands,” said Keillen Ndlovu, head of listed property funds at Stanlib. 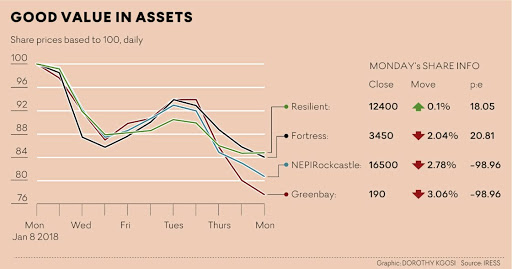 JSE-listed retail landlord Hyprop Investments competed with Resilient for the same shopping centre in Bulgaria last year. Hyprop acquired The Mall, the largest shopping centre in Sofia. Nepi Rockcastle, which is part of the Resilient group, subsequently acquired a competing centre in the capital city. Rockcastle, before merging with Nepi, was also a bidder for a Polish portfolio in 2016, but the bid was won by Redefine.

Viceroy, an offshore research group which profits from short selling, has said its second exposé on a South African company is imminent. This has led to a sell-off in Resilient stable shares. Fund managers believe that if Viceroy’s report discusses Resilient and its partners, financial engineering should be paramount in the discussion.

Key criticism may include that members of the stable including Resilient, Fortress Income Fund, Nepi Rockcastle and Greenbay Properties continuously raise equity capital and subscribe to each other’s shares, which means too much value stems from financial engineering instead of underlying bricks and mortar assets.

The companies also use cross-currency swaps to purchase less expensive debt, by getting the best rate available of a currency and then exchanging it back to the desired or needed currency with back-to-back loans. Currency swaps can also hedge against foreign exchange rate fluctuations.

A fund manager said Resilient had a strategy with its broad-based black economic empowerment (BBBEE) fund that created nonproperty income. Resilient issued its shares to the BBBEE partner, which paid for these shares with a loan from Resilient. The interest rate on the loan was significantly higher than the yield on Resilient shares and this transaction therefore added to distributable income as the entity was not consolidated.

Commenting on the short selling, Resilient CEO Des de Beer said the company was aware that two hedge funds were running a campaign in tandem to panic the market.