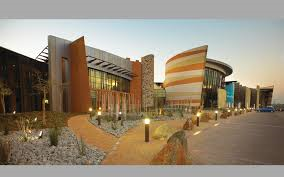 28 October 2016: The 150 000 square metre campus shared by WesBank and FNB in Fairland, north of Johannesburg, is on its way to earning a five-star rating from the Green Building Council of South Africa (GBCSA). For its tenth birthday, next year, the campus will supplement its electricity supply using a large-scale solar panel installation.

More than 5 000 WesBank and FNB employees are based at the Fairland campus, which has 978 outdoor parking bays. Over the next 11 months the ageing car ports will be replaced by new structures that use 7 019 photovoltaic (PV) panels. Along with providing shade for vehicles, this installation will be capable of providing 1 806 kilowatt hours of energy (peak) to the building – with a total expected supply of 3 000

000 kilowatt hours per annum. This would be enough to power the average South African household for nearly 800 years.

This project forms part of existing measures to reduce electricity consumption at the Fairland Campus. It will be rolled out in two phases, with the first to be completed by March 2017. The second phase is scheduled to be complete by September next year, and by Arbor Week the Fairland campus will switch on its solar grid – a move that will save the group around R3.9 million in electricity costs during the first year of operation.

“It is absolutely our responsibility to embark on initiatives like this. It is our social and environmental duty to reduce our carbon footprint wherever it is possible to do so,” says Chris de Kock, CEO of WesBank. “With this solar installation we will be ushering in the era of sustainable energy for the business – a revolution that that will also become a reality for people’s houses and cars.”

“The work that is about to commence in Fairland is a sign of our continued commitment to environmental sustainability. FNB has a solid track record of environmentally sustainable buildings. Our Portside regional head office in Cape Town earned a 5-Star Green rating from the Green Building Council of South Africa and FNB Acacia House, our KZN regional head office has a 4-Star Green rating,” says Jacques Celliers, CEO of FNB. “However, for us the focus is not so much on ratings, we also want to run a business that makes a positive and meaningful contribution to society, by thinking outside the box when responding to the environmental issues.”

The Fairland campus already has a 4-Star rating from the GBCSA. The building has a significant focus on sustainability and employs a number of measures to minimise the impact on the environment. Offices are equipped with population density sensors that power off lights when no human activity is detected. A separate solar panel installation is also used to heat water for ablution facilities. Sun screens on the exterior of the building provide insulation, aiding the efficiency of the heating and cooling systems.

Extensive water-saving measures are also in place. The air-conditioning system is able to harvest condensation, allowing for

30 000 to 60 000 litres of water to be collected and used for irrigation purposes. An on-site water pond is also used to collect storm water and serves as a safety mechanism to assist in preventing soil erosion on the banks of the nearby Klein-Jukskei river.